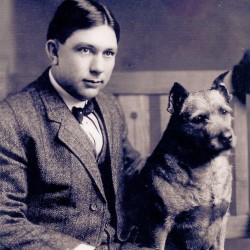 Rounder was no ordinary dog. Owned by Dick Marlow, one of the original owners of The Mint Bar, Rounder was known to most everyone in Sheridan and they were known to him. He was smart, did tricks and spent many hours as the favorite patron of the Mint. He was also VERY devoted to his owner. Being so well known and loved in town, the local newspaper, The Sheridan Post, featured three articles on him, even after he and Mr. Marlow moved on to California. They even ran an obituary when he passed in 1913!